The wait is finally over for Dave Rice’s UNLV basketball team that opens its 2013-14 season Friday night with an exhibition game against Dixie State at the Thomas & Mack Center at 8 p.m.

Well, make that the wait is over for all the Runnin’ Rebels except one: Fresno State transfer Kevin Olekaibe.

As of Thursday night, UNLV still hadn’t received word back from the NCAA on Olekaibe’s eligibility hardship waiver that was filed at the end of August.

“Right now I’m clueless,” Olekaibe, a 6-foot-2 senior who prepped at Cimarron-Memorial High School, said after Thursday’s practice. “I’m still going into practice and walk-thru as if I’m playing tomorrow. Hopefully we get a decision tomorrow.”
(STORY CONTINUES BELOW)

If not, Olekaibe will have to watch the game on the bench and continue to wait for the NCAA’s verdict.

A three-year starter for the Bulldogs who has scored 1,169 points, Olekaibe, who said he had Fresno State’s backing, decided to move back home to Las Vegas for his senior season so that he could be closer to his family and ailing father, Benson, who is in hospice care after suffering a pair of strokes that left him paralyzed from the waist down.

“I know cases that have cleared, most of them are on Friday before the weekend so hopefully I’ll hear back from them tomorrow,” Olekaibe said. “I’m approaching practice as if I’m playing tomorrow and just be ready.”

“We’re anxious to get a decision but patient at the same time,” Rice, who obviously has a future as politician if he wants, said when asked if he was surprised the NCAA still hadn’t issued a ruling on Olekaibe.

If worse comes to worse and the waiver is denied, Olekaibe does have a redshirt year available.

“I want to play with these guys and be on the court with them,” he said. “If not, I’ll be on the sideline cheering them on and helping guys out on the court. Transition-wise, it’s been great. These guys have accepted me, and I’m grateful for that. They know my situation and they’ve supported me, and (so have) the coaches. I can’t thank them enough and I’m just happy to be here.”

UNLV has 10 new players on a roster that returns Mountain West Defensive Player of the Year Khem Birch at center and junior Bryce Dejean-Jones at shooting guard. The other spots are up for grabs and Rice said he will use the team’s two exhibitions with Dixie State and Adams State (Tuesday) to determine his starting five for the Nov. 8 season opener with Portland State.

“I want to see different combinations. I may start different guys in the second half than I start in the first half. And then Tuesday against Adams State will be more like what the Portland State game will be in terms of a set starting lineup and rotations.”

REBEL NOTES: Rice said he has made no decisions on what players may be asked to redshirt other than junior walk-on guard Barry Cheaney, a biology and pre-med major who is taking the year off to concentrate on a heavy academic load. Cheaney will still practice with the team but will not travel. … The 8 p.m. tipoff is later than usual in order to accommodate fans that also want to attend different Homecoming festivities on campus earlier in the evening. … UNLV is 35-3 all-time in exhibition games including a 81-80 overtime win over Dixie State last year. The Red Storm actually led the Rebels by seven points with three minutes left in OT before UNLV ended the contest with an 8-0 run capped by a layup by Lopez-Sosa off an Anthony Marshall assist with six seconds to go. 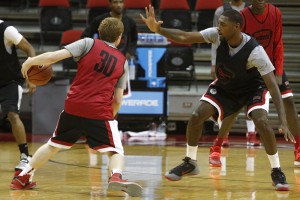