Dwight Howard watched the game in his preppy street clothes from the bench. Kobe Bryant, Pau Gasol and Steve Nash joined him for the fourth quarter.

The Los Angeles Lakers, expected to challenge the Miami Heat for the NBA title, fell to 0-5 in the preseason with a 103-98 loss to the Sacramento Kings (3-1) on Friday night before a near sellout crowd at the Thomas & Mack Center.

Gasol scored 20 points and 6 rebounds while Nash had 8 points and 6 assists in 28 minutes for the Lakers. Forward Devin Ebanks added 20 points, including 4 of 5 3-pointers, to make it close down the stretch.

Sacramento was led by guard Marcus Thornton’s 19 points while DeMarcus Cousins had 18 points and 10 rebounds. 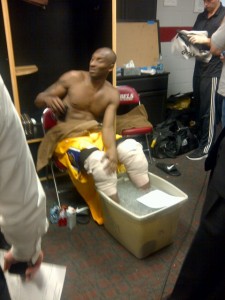