After watching his star quarterback account for five touchdowns in the final game of a storied career, Bishop Gorman coach Kenny Sanchez decided to call a timeout to give Tate Martell a curtain call.

It was a well deserved honor considering the Ohio State-bound Martell had just finished his Gorman career with a perfect 45-0 record while quarterbacking the No. 1 ranked Gaels to three straight state titles and, in all likelihood, a third consecutive national championship.

But what was surprising was the timing of Sanchez’s move: the first play of the third quarter.

That sound you hear is an exclamation point for what should be a national title three-peat.

“I think we’ll be No. 1 in all the national rankings,” said Martell, who completed 6-of-7 passes for 127 yards and two touchdowns and also rushed for 72 yards and three more TDs. “It will be the first time there was ever an undisputed national champion so that will be cool.” 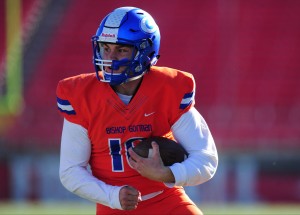 Saturday’s win made it an unprecedented 18-0 against USA Today Top 50 nationally ranked teams over the last three years for Bishop Gorman. And that was definitely worth taking a bow as Martell left the field for the final time as a Gael.

“It was pretty cool,” Martell said of the special acknowledgement. “Coach K told me he was going to do that. It was a special moment to kind of reflect on everything I’ve done here.”

Martell wasn’t the only one to receive a curtain call for the Gaels.

Cal-bound running Biaggio Ali Walsh, who finished with 109 yards on 12 carries including touchdown runs of 9 and 22 yards, got one on the play after Martell.

Ali Walsh’s first score came just 59 seconds into the game and came three plays after sophomore cornerback Greg Oliver intercepted a tipped Kenyon Oblad pass on Liberty’s first offensive play of the game. His second, a 22-yarder with 2:02 left in the first quarter, gave the Gaels a 35-0 lead.

“Crazy,” Ali Walsh said of the lopsided score. “I really didn’t expect this. Liberty is a good team. We came out very focused and we wanted to come out here and start good off the bat. And that’s what happened.

“I don’t think we have anything else to prove. We had the hardest schedule in the country. I think this just shows, especially with that score, we should be (national champions).”

Senior defensive stars Haskell Garrett, Alex Perry and Bubba Bolden, whose dramatic field goal block in overtime against Florida powerhouse St. Thomas Aquinas kept Gorman’s national title hopes alive back in late September, also got early curtain calls. Perry, however, returned to run back a punt 58 yards for a touchdown that made it 70-8 midway through the third quarter.

“He’s been wanting to return punts all year so he got his chance,” Sanchez said. “That’s the kind of day it was.” 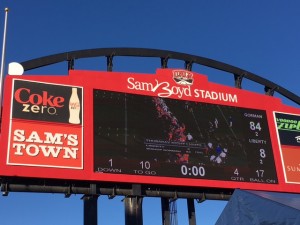 Yes, there was a long list of positives for the Gaels.

Junior wide receiver Jalen Nailor caught four passes for 106 yards and two touchdowns while junior tight end Brevin Jordan hauled in a 12-yard touchdown pass. Another talented junior, Dorian Thompson-Robinson, who already has about two dozen scholarship offers, took over for Martell at quarterback and served notice there will be little, if any, drop off there next season, passing for a touchdown and running 17 yards for another score while senior linebacker Brock Ruggeroli ended the day’s scoring with a interception return for a touchdown. And senior defensive back Austin Arnold scooped up a high center snap that went over Oblad’s head for a touchdown during the first quarter scoring barrage.

“Yes, exclamation point,” Sanchez said of the season-ending win. “Phenomenal. I’m just so excited for these kids and what they’ve accomplished.”

Liberty’s only points came on a three-yard touchdown pass from Oblad to senior wider receiver Darion Acohido. San Diego State-bound Ethan Dedeaux then ran in the conversion to make it 42-8.

It should be noted that Bishop Gorman did it all without one of their top offensive weapons, explosive 5-star wide receiver Tyjon Lindsey. The Ohio State-bound Lindsey had knee surgery last week but should be ready to go for fall camp in Columbus where he will be likely competing to replace Curtis Samuels if he elects to bypass his senior season as expected.

It was the eighth straight state title for the Gaels who also extended their winning streak to 54 games. Bishop Gorman hasn’t lost to a team from Nevada since 2008, a span of 87 games.