Tom Lemming, who has been crisscrossing the country for over 35 years meeting, interviewing and evaluating the nation’s top prep football prospects, was on the phone. And not surprisingly, the man who hosts a weekly television recruiting show, the Lemming Report, on CBS College Sports, was on the road in Virginia getting a head start on the top prospects for the Class of 2015.

But the topic of conversation this time was about Friday night’s nationally televised high school football game between No. 1 ranked Miami (Fla.) Washington (5-0) and No. 25 Bishop Gorman (4-1) at Fertitta Field (7 p.m., ESPNU).

Lemming, who had spent time with players from both schools over the past year compiling bios and photos for his massive 366 Prep Football Report magazine — the bible of college football recruiting publications — didn’t hold back.

“Without a doubt those are of two of the most talented high school teams in the country,” Lemming said. “They’re both loaded with BCS level prospects.”

Lemming, who gathered the top players from Las Vegas at Fertitta Field back in early April, rattled off the names of prospects from Booker T. Washington for local recruitaholics to keep an eye at Friday night’s game.

Here’s a short scouting report from Lemming on some of the top players from the Tornadoes:

DE Chad “Big Shorty” Thomas, 6-5, 230, 4.8, Sr. – “He’s on my list as one the top 10 defensive end prospects in the nation. He has great quickness and can really get off the ball and pursue. A great athlete who is committed to Miami.”

QB Treon Harris, 5-11, 183, 4.45, Sr. – “He’s one of the premier athletes in the country who could play anything from wingback to wide receiver to defensive back in college. But there’s no doubt in my mind he could, despite his height, also play quarterback at the next level. He’s kind of a Russell Wilson type of quarterback. He can sit in the pocket and wait until receivers get open and then make good throws or he can get out and run. His game film has him making big play after big play. His dad is the coach and he’s committed to Florida State.”

CB Nigel “Showtime” Bethel, 5-9, 170, 4.4, Sr. – He’s a terrific cover corner who can also come up and stuff the run. He has excellent ball skills and instincts and isn’t afraid to mix it up. He’s committed to Miami.”

WR Lamar Parker, 5-9, 160, 4.4, Sr. – He’s an exciting playmaker and very explosive. Speed is the name of his game, plus he has the ability to finish off runs for extra yardage. He’s committed West Virginia and will be a real big test for Gorman’s secondary.

Lemming also had plenty of compliments for Bishop Gorman players as well.

On 6-foot-4, 230-pound junior Alize Jones: “He might just be the top junior tight end prospect in the country. He has large hands, great body control and leaping ability and catches everything within reach. A big-time player.” 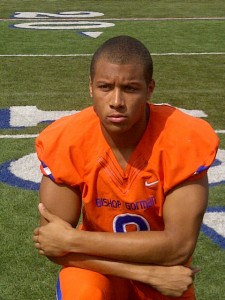 On 5-10, 180-pound junior defensive back Nicco Fertitta: “He’s one of the better safeties I’ve seen on film. He doesn’t have great size but makes up for it with great instincts and a furocious attitude. He always in and around the ball. He might be their best defensive player.” 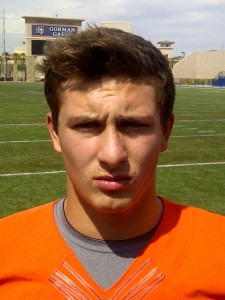 On 6-5, 275-pound senior offensive lineman Nick Gates: “He has really good size and feet. I know he’s been offered by everybody including schools like Alabama. I think he’s perfectly suited to play offensive guard at the next level.”

It should be noted there will be close to two dozen FBS level prospects on the field but these are the ones Lemming singled out for me.