RENO – As he helped load up the equipment truck at Mackay Stadium for the long eight-hour trip back to Las Vegas on Saturday night, UNLV assistant equipment manager Rocky Rutledge had to find a place to secure some extra cargo.

A crowd of players, boosters and family members watched and took photographs as several Rebels wheeled the prized trophy up a ramp and into the truck where it was latched down near bags of dirty uniforms, exercise bikes and other equipment the Rebels used during their 27-22 victory over Nevada.

Unlike in 2000, when John Robinson’s squad broke out the spray paint and colored it Rebel Red right on the field at Sam Boyd Stadium, the Fremont Cannon was still shiny and painted blue.

But not for long.

“I think we are going to paint it Monday,” wide receiver Devante Davis, who caught a 11-yard touchdown pass from Caleb Herring with 5:54 to go that proved to be the game-winner, said. “But it will be painted … for sure!”

After eight long, agonizing and painful years, the Rebels finally found a way to defeat their in-state rivals and regain possession of the cannon, and did it right under the noses of the f-bomb dropping, middle-finger waving folks in blue and silver who lined the long pathway from the field to the locker room.

“Coming off when you know that you’ve got the win, you did what you came here to do, it made the smile that much bigger,” senior quarterback Caleb Herring, who completed 29-of-42 passes for 335 yards and three touchdowns, said. “(And) knowing that no matter what was said, we got the win, we got the cannon back, and we’re going back to Vegas as winners today.”

For some Rebels it was enough to, well, let running back Tim Cornett, tell you.

“It’s a big deal,” UNLV coach Bobby Hauck said. “It’s a rivalry game. It’s supposed to be emotional, and I was excited for our kids, and all our fans that have hung with us, to have that thing in our possession.”

“Your goal from the start of the season is to get that cannon, and to finally get it feels great,” added Davis. 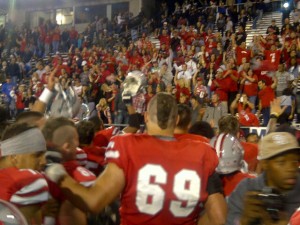 But early in the fourth quarter, cornerback Tajh Hasson forced a fumble from Wolf Pack wide receiver Aaron Bradley after a short completion and safety Frank Crawford recovered at the UNR 27. Three plays later, Cornett powered in from 9-yards out, seemingly dragging half the Nevada defense with him the final few yards to give UNLV a 21-16 lead.

“I felt a lot of people hanging on but I felt like I had push from some of my players too,” said Cornett, who finished with 122 hard-earned yards on 26 carries despite being on crutches with a sore knee earlier in the week. “I don’t know. My head was down. I couldn’t see.” 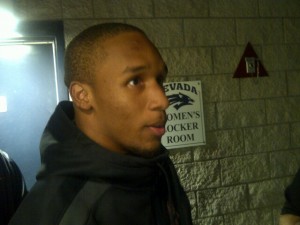 UNLV running back Tim Cornett talks with the media after the Rebels’ 27-22 win over Nevada.

Still, there were more than a few anxious moments down the stretch after Fajardo hit Bradley with a 9-yard touchdown pass with 3:25 to go. The Wolf Pack failed to convert the two-point conversion or things could have really gotten interesting late.

As it was, Nevada got the ball back on its own 12 with 2:15 left and just one timeout remaining. The Pack, with the aid of a questionable personal foul penalty on defensive end Parker Holloway, drove to their own 40 before turning it over on downs after Hasson broke up a fourth-down pass in the flat.

“That was probably the most exciting defensive series I’ve ever watched,” Herring said.

After that it was just a matter of a pair of kneel-downs before UNLV began a long overdue celebration.

It seemed only fitting that Herring be the one to take the final snap. Two years earlier on this same field he had suffered through what was arguably the worst game by a Rebel quarterback in school history, completing just one pass in 14 attempts for a measly 8 yards in a 37-0 loss to the Wolf Pack. This time around, however, he was the best player in the game, passing for 335 yards and three touchdowns and rushing for 34 more yards while also directing his team to a tough road win.

“(Two years ago) here he played about as badly as he could play,” Hauck said. “He came out of here beat down mentally, and had to make a decision on what he was going to do. And to his credit, he chose to go back to work and be with his football team and work to improve.

“He’s a shining example to young players all around the country for what happens when you do things right and keep working hard. He’s a tremendous success story. And tonight he’s carried his football team and did a real nice job.”

“It’s very satisfying,” Herring admitted. “Any time you get a chance to redeem yourself, it’s definitely something you want to take advantage of. But that’s not the approach I took coming into this game. I just wanted to get the win. Bringing the cannon is redemption enough, regardless of how I played or anything. Bringing that cannon home is definitely what I wanted this week.”