PASADENA, Calif. – UNLV made its first ever trip here to play in the iconic Rose Bowl against UCLA on Saturday night. And even though the 42-21 loss before a crowd of 63,712 wasn’t quite the result the Rebels had hoped for, there were still some positives to take on the long bus ride home.

Unlike a year earlier when the Bruins cruised to a 37-3 victory at Sam Boyd Stadium, UNLV (1-1) actually was in this one, trailing just 28-21 in the fourth quarter before the Bruins, aided by a key targeting penalty on free safety Kenny Keys, sealed it with a pair of time consuming drives covering 73 and 88 yards.

Still, it was a positive barometer for the way the program is heading in year two under Tony Sanchez. Just ask Bruins coach Jim Mora.

“That was a hard-fought game against a real worthy opponent,” Mora said. “That’s a (UNLV) team that has made a lot of improvement in a year, and their players are buying into their system.”

UNLV quarterback Johnny Stanton’s 11-yard touchdown made it 28-21 with 5:13 to go in the third quarter and the Rebel defense then forced a three-and-out.

But UNLV managed just a pair of first downs on its next possession before punting. Then the Bruins took control with a 10-play, 73-yard drive capped by a one-yard run by Bolu Olorunfunmi with 11:39 remaining in the game. The drive was aided by the targeting penalty by Keys on UCLA wide receiver Eldridge Massington, who had already dropped the 3rd-and-10 pass from Josh Rosen.

Instead of likely punting from their own 49, UCLA had a first down at the Rebel 36. Keys, whose helmet nailed Massington under the chin and then went flying, was ejected from the game and will also have to sit out the first half of next week’s game at Central Michigan.

“That was a big point in the game,” Sanchez said. “We’re getting the ball back, down by seven, late in the game. But then they go back down and score, and you’re chasing after that.”

Indeed, UNLV responded meekly with a three-and-out and the Bruins put away any doubt with an impressive 88-yard, 13-play drive that chewed up almost six minutes of the clock and ended with a one-yard touchdown run by Rosen with 4:54 left.

“I haven’t really seen it, or played it back enough to really look at it,” Sanchez said when asked about Keys’ targeting ejection. “It’s unfortunate. It’s hard to jump up and down and yell about something like that.”

UCLA finished with 499 yards, including 219 rushing, and 30 first downs. The Bruins also were 8-of-13 on third down and 2-of-2 on fourth down while controlling the ball for 33 minutes and 38 seconds.

Rosen, considered a strong candidate to be the top pick of the 2018 NFL Draft, finished 23-of-38 for 267 yards and a touchdown. Those numbers would have even more glossy if not for at least a half-dozen drops.

Stanton completed just 11-of-28 passes for 153 yards, including a 14-yard touchdown pass to freshman Mekhi Stevenson just before halftime. But he also was intercepted twice and, according to Sanchez, had some issues with game management.

“I thought he did some things well,” Sanchez said. “I think that he’s got to do a better job with certain things. A couple of times he set up the formations wrong. … But this was the first time playing in an environment like this against a Pac-12 team that had been rated in the top 15 or 16 in the country a week ago.”

Still, the competitive Sanchez was left thinking what might have been if not for the fourth quarter meltdown.

“We gave ourselves some opportunities in the fourth quarter, and they pulled away at the end,” Sanchez said. “So it kind of stings.” 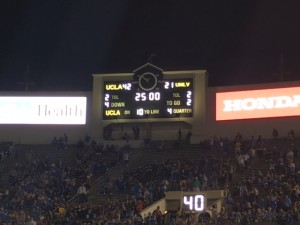