UNLV concluded the worst regular season in school history with a 72-59 loss at Fresno State on Saturday afternoon.

UNLV probably couldn’t have drawn a worse matchup than the Aztecs who have won 10 in a row over the Runnin’ Rebels and 19 of the past 23 meetings. San Diego State won both games this season by 13 points, 64-51 at the Thomas & Mack Center on Jan. 17, and 77-64 in San Diego on Feb. 19, and plays the kind of lockdown defense that figures to give the offensively-challenged UNLV major problems.

The Rebels, who snapped a school-record-tying nine-game losing streak with a 66-59 victory over Utah State on Wednesday, failed to build on it against the Bulldogs (19-11, 11-7).

UNLV was competitive for a little over six minutes, taking a 12-11 lead on a Kris Clyburn rebound with 13:40 to go in the first half. But the Rebels then went into one of their all-too-familiar offensive droughts, connecting on just two of their next 18 field goal attempts, and the Bulldogs responded by going on a 23-6 run en route to a 34-18 lead.

Clyburn had 18 points and a game-high 12 rebounds to lead UNLV while point guard Jovan Mooring added 12 points on 3-of-9 shooting.

Fresno State, which shot 45.3 percent, finished with a 44-28 edge in points in the paint and forced 16 turnovers.

Click on graphics below for final stats and Mountain West standings. 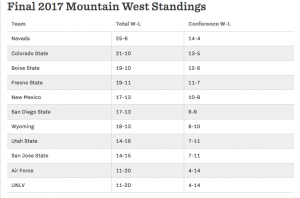