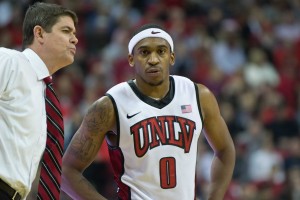 It all seemed so easy at first.
The UNLV Runnin’ Rebels, behind a pair of 3-pointers by Anthony Marshall and Chace Stanback,bolted out to a 12-0 lead after four minutes Wednesday night at Boise State. It looked like Dave Rice’s squad, fresh off back-to-back blowout wins over New Mexico and TCU, was well on its way to another Mountain West rout.
But the Rebels (19-3, 3-1) needed a huge block by forward Mike Moser at the end of regulation simply to force overtime before eventually pulling out an ugly 77-72 overtime win over the Broncos (10-9, 0-4) at Taco Bell Arena.
UNLV won despite shooting just 34.8 percent from the floor and losing Marshall (5 points) to fouls with 3:17 remaining. Moser, battling the flu, helped save the day with his 11th double-double of the season, finishing with 18 points and 21 rebounds, including 14 points and 14 rebounds after halftime.
However, Moser’s biggest play may have been his block of Thomas Broplegh’s 3-point attempt with one second remaining in regulation that got the Rebels into overtime.
“Unbelievable,” Rice said. “Mike is as sick as a guy can be. He had to miss practice. He such a tough kid and yet he just keeps battling back and finding a way. We needed everybody tonight.”
Senior forward Chace Stanback added 15 points and senior point guard Oscar Bellfield finished with 13 points, including a key 3-pointer of a nice Moser assist midway through overtime, to go along with six assists and two steals.
Freshman guard Derrick Marks, who looked unstoppable at times driving to the basket, scored 21 points and had four assists and Bropleh added 17 points, including 4 of 9 3-pointers, to lead the Broncos, who lost for just the second time in 11 games at home this season.
“It’s good to get out of here with a win,” Rice said.
After their quick start, the Rebels appeared to ease up a little and lost focus offensively when Boise State switched to a zone defense, often settling for quick 3-point shots. UNLV attempted 34 treys and made 13 (38.5 percent).
“Definitely a lesson learned,” Bellfield said. “Hopefully we don’t have to go through this again.”
With a Saturday night game at always pesky Air Force (11-7, 1-3) on deck, Rice said the Rebels must improve their intensity for further road games.
“It’s very concerning,” Rice said. “We have not brought it the way we need to bring it. It starts with me. I’ve got to find a way for us to play harder at the start of (road) games. … If we don’t give a better effort and performance on Saturday, we’re going to be right in the same situation … fighting it out at the end.”
— MyLvSports.com Staff Report