What a difference a week makes. Just ask the UNLV Runnin’ Rebels.

Seven days after limping home from lovely Laramie, Wyo., with an 0-3 Mountain West Conference record following another uninspiring loss, the Rebels had reason to smile – not to mention laugh a little — after dispensing a 100-64 beat-down of Air Force (10-8, 1-4) on Saturday night at the Thomas & Mack Center.

It was the second straight impressive performance by UNLV (11-7, 2-3) under interim head coach Todd Simon who took over for Dave Rice on Sunday following the nightmarish Front Range trip to Colorado State and Wyoming.

Austin Starr’s 3-pointer with 1:02 to go enabled the Rebels to hit the century mark for the third time this season and capped a night that saw UNLV shoot 50 percent from the floor, including 13-of-25 from 3-point range, and finish with a 52-20 rebounding edge.

HOW IT HAPPENED: UNLV dominated from the start, using an early 15-0 run capped by a dunk by freshman forward Derrick Jones Jr. to build a 25-5 lead after just eight minutes. The Rebels led by as many as 31 points, 51-20, on a 3-pointer by sophomore guard Patrick McCaw en route to a 53-25 halftime advantage and led by as many as 38 points in the second half.

THE SKINNY: The Rebels (2-3), who began the week in the Mountain West cellar, now find themselves in a three-way tie for seventh with Colorado State and Nevada and just a game behind third place Fresno State and New Mexico (3-2). However, now comes a two-game road trip that will determine just how legitimate the turnaround is. UNLV is just 1-4 on the road this season with the only win at UC Riverside (73-62).

QUOTES TO NOTE:
Simon on finishing with a 52-20 rebounding edge, including 20 offensive boards that led to a 26-9 advantage in second chance points:
“Early in the season, if you think back, that was a major, major, major concern of ours. The guys have just put their head down. 52-20 tonight, 20 offensive rebounds, only gave up five. That’s how we want to play.”

Seagears on how much his outlook on the season has changed after back-to-back wins this week:
“Just taking it one game at a time. We know that we can play with the best of our league, and we know that when we come to play and show up and do what we’re supposed to do, we know we have a high chance of winning every game.”

UP NEXT: UNLV begins a two-game road trip on Tuesday night at Utah State. The game, which tips off at 6 p.m. PT, will be streamed by ESPN3. The Rebels play at UNR on Saturday night before returning home to face Boise State on Jan. 27.

NOTABLE: Zimmerman’s double-double was his seventh of the season. … The Rebels made 19-of-20 free throws, a season-best 95.0 percent at the line. The previous best was 85.7 percent against Oregon. … Jones, who finished with 22 points and 10 rebounds, had scored a total of 17 points and grabbed seven rebounds in his previous four games combined. 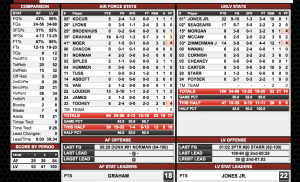