UNLV coach Dave Rice said he had a pretty good feeling about his team heading into Friday afternoon’s game with Pac-12 favorite Cal.

“I knew at the shootaround today that we would play well,” Rice said. “We were locked into what we were trying to do.”

He’ll get no disagreement from the Golden Bears on that account.

It would be hard to say the victory topped UNLV’s overall performance in a 90-80 upset of No. 1 North Carolina on Nov. 26 but it was pretty darn close.

“Extremely proud of our effort,” Rice said. “Told the team afterward that for 35 of 40 minutes this afternoon we were sensational.”

It’s not every day that you hear a head coach throw out the term “sensational” about his team but considering the caliber of competition it was warranted.

UNLV led by as many as 27 points (72-45) midway through the second half after using a 31-12 spurt to build a 46-26 halftime advantage. The Rebels did it with outside shooting (9 of 24 3-pointers, 37.5 percent) and outstanding interior passing that resulted in a number of crowd-pleasing dunks, including one highlight-reel special by Marshall off a backdoor lob pass from Bellfield. The Rebels doubled Cal in assists (22-11) and also finished with a 46-37 rebounding edge.

“Our guys were focused,” Rice said. “They were ready to go.”

“You could sense the focus on everybody’s faces,” Stanback said of the team’s morning shootaround. “Nobody looked sleepy and everybody was locked into what we wanted to do.”

That meant playing strong perimeter defense against a Cal squad that entered the game ranked third nationally in 3-point shooting (43.8 percent) and was playing without 6-foot-10 starting forward Richard Solomon (left foot injury), the Bears’ top rebounder at 6.9 per game.

“We just came out with the mindset of defense,” Marshall said. “We felt if we got defensive stops that would allow us to get our offense going.” 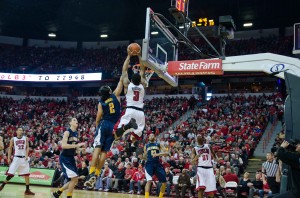 UNLV guard Anthony Marshall slams home a dunk as Cal's Jorge Gutierrez looks on during the Rebels' 85-68 win on Dec. 23 at the Thomas & Mack Center. (Mylvsports photo by David Cleveland)

UNLV held the Bears to just 37.7 percent shooting (23 of 61), including just 33.3 percent behind the arc. Guard Justin Cobbs led the Bears with 20 points.

The Rebels scattered after the game for flights home to celebrate Christmas with their families. They’ll report back for practice on Monday night to begin game preparation for Wednesday night’s home game against Central Arkansas.