The 2016-17 season continues to be one for the record books for the UNLV Runnin’ Rebels who manage to find ways to accomplish new lows for the once-proud program.

Saturday’s 94-58 thumping by in-state rival Nevada at the Thomas & Mack Center tied the school record for consecutive losses (nine) set in its very first season (1958-59) and also marked UNLV’s worse ever to the Wolf Pack, easily eclipsing the previous mark of 27 points set just 17 days earlier in a 104-77 loss in Reno.

All this on a day when the school honored its 1987 Final Four team at halftime. For those who remember the glory days of Armen Gilliam, Freddie Banks, Eldridge Hudson, Jarvis Basnight, Mark Wade and Gerald Paddio, it was a painful reminder of just how far the program has fallen.

Not that that is saying much these days. The Runnin’ Rebels fell to 10-19 overall with the defeat – a record for most losses in a season with at least three games to go – and 3-13 in Mountain West play, a game behind Air Force (11-18, 4-12) in the battle for the conference basement.

“A loss like this I haven’t experienced too often in my career, especially rivalry games,” Menzies said. “This is very painful you guys, and it’s a hard pill to swallow.

“We’re just not very good right now. I don’t know how else to say this. It is what it is.” 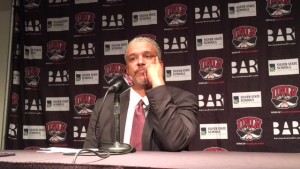 WHO STOOD OUT: The 6-foot-7 Caroline, an active sophomore transfer from Southern Illinois, had his 11th double-double of the season with game highs in scoring (31 points) and rebounding (10), connecting on 12-of-19 from the field, including 3-of-6 from 3-point range. Marshall, a senior transfer from Missouri State who leads the Mountain West in scoring, made a career-high eight 3-pointers on just 10 attempts en route to 28 points.

Senior forward Christian Jones led UNLV with 15 points on 7-of-10 shooting while guards Kris Clyburn and Jovan Mooring each added 12 points but were just a combined 9-of-23 from the field as the Rebels shot 39.3 percent for the game.

QUOTES TO NOTE: “Didn’t yell, cuss or scream at them. I just told them the truth and the reality of the situation. This transition has been tough so we’ve got to define how we’re going to finish this thing.” – Menzies on what he told his team after the game.

UP NEXT: The Runnin’ Rebels play their final regular-season home game of the year on Wednesday night when they host ninth place Utah State (13-15, 7-10) at 8 p.m. The Senior Night contest will be televised by ESPNU. A free t-shirt will be given to the first 4,000 fans and a free senior commemorative poster will be given to the first 2,000 fans. The Aggies defeated UNLV, 79-63, in the first meeting on Jan. 7.

NOTABLE: UNLV fell to 8-9 at home including just 2-6 in Mountain West play. … An announced crowd of 14,808 – it appeared to be about half that – attended the game with many leaving midway through the second half. … The Wolf Pack’s biggest lead was 38 points (90-52) after a Caroline steal and dunk with 5:17 remaining. … UNLV led, 12-11, after a Jones basket but Nevada then took control with a 16-2 run over the next four minutes. The Wolf Pack also had an 18-0 run in the second half. … Nevada finished with a 47-31 rebounding edge and parlayed 16 offensive boards into a 15-5 advantage in second chance points. … UNLV was credited with just 10 turnovers but the Wolf Pack, which turned the ball over just four times, finished with a 20-2 edge in points off turnovers. … Nevada goes into the final week of conferene play in a tie for first place with Colorado State.

Click on graphics below for final stats and Mountain West standings: 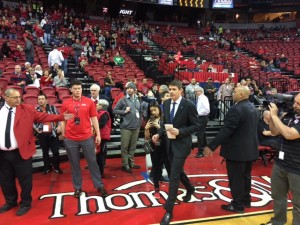