Battling painful injuries to his heel, hand and back, UNLV guard Jerome Seagears was held out of contact drills heading into Saturday night’s home finale with Wyoming.

Didn’t seem to bother the shooting touch for the 6-foot-1 transfer from Rutgers. Just ask the Cowboys.

Seagears connected on a season-high six 3-pointers on just eight attempts, including two key ones in crunch time that put the Runnin’ Rebels (17-13, 8-9 Mountain West) ahead to stay en route to a hard-fought 79-74 Senior Night victory at the Thomas & Mack Center.

“I’m just so proud of these guys’ toughness,” UNLV interim head coach Todd Simon said. “Jerome hasn’t been practicing. … He gave us 24 hard minutes, hits those six 3’s, especially a couple in the clutch down the stretch. He gave us everything he had.”

So did freshmen forwards Derrick Jones Jr. and Stephen Zimmerman Jr. who combined for 35 points and 20 rebounds.

The 7-foot Zimmerman, who had missed five games after spraining his left knee, finished with his 10th double-double, scoring 12 points and grabbing 11 rebounds in a surprising 36 minutes of action. 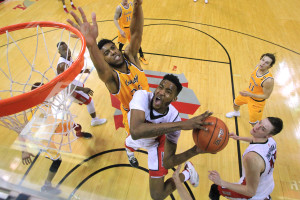 “Sitting out really killed me,” Zimmerman said. “I knew my team wanted me back and everything. I was just really happy to be back out there.”

Jones finished with a team-high 23 points, including 11-of-13 free throws, to go along with nine rebounds, four steals and a block.

HOW IT HAPPENED: Seagears hit three consecutive 3-pointers to give UNLV a 9-0 lead to open the game and the Rebels led by as many as 12 points, 23-11, after a Zimmerman layup. But senior guard Josh Adams, playing with a brace around his left ankle, heated up after that, hitting a pair of 3-pointers during a 12-3 spurt as the Cowboys cut the deficit to two. UNLV, thanks to Zimmerman’s grab of a long rebound and dunk, went into halftime with a 37-33 edge.

The second half featured five ties and eight lead changes before Seagears hit back-to-back 3-pointers to put UNLV ahead to stay, 68-64. Jones sealed the win with six points in the final 1:33, including 3-of-4 free throws.

Adams, who entered the contest averaging a Mountain West leading 24.6 points, led Wyoming (13-17, 6-11) with 31 points, including 7-of-14 3-pointers, to go along with five assists and four steals before fouling out.

QUOTES TO NOTE:
Simon on the play of freshman forward Derrick Jones Jr.:
“The improvement of Derrick from day one to now is just astronomical. … His upside is through the roof.”

Simon on the return of Zimmerman after five games from a knee injury:
“He’s been chomping at the bit to play. He’s a very competitive kid. … He’s just been bugging us and dying to get out there.”

UP NEXT: The Rebels conclude Mountain West regular season play on Saturday night at San Diego State. The 7 p.m. game will be televised by the CBS Sports Network.

NOTABLE: UNLV has won 15 straight over Wyoming at the Thomas & Mack Center. … Simon started all three of his seniors: Seagears, Nwamu and walk-on Barry Cheaney, who picked up a foul and missed his only field goal attempt in three minutes of action. … UNLV had nine steals and forced 13 turnovers, finishing with a 16-10 edge in points off turnovers. … The Rebels were credited with 21 assists on 23 baskets. Sophomore guard Patrick McCaw, who finished with just five points on 2-of-8 shooting, had a career-high nine assists and no turnovers in 39 minutes of action. 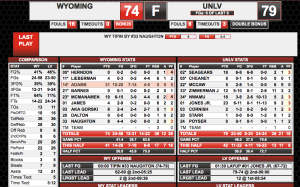