Bobby Hauck will coach his final game at UNLV on Saturday night when the Rebels face Nevada in the annual Battle for the Fremont Cannon at Sam Boyd Stadium.

Hauck has turned in his resignation on Friday to athletic director Tina Kunzer-Murphy and also informed the team and coaching staff.

“Bobby Hauck submitted his resignation, effective Monday, and I have accepted it,” Kunzer-Murphy said in a statement. “No one has worked harder in trying to achieve consistent success with our football program than Coach Hauck and we thank him for his dedication and leadership. He and his staff have worked tirelessly in trying to achieve the results we all want to see but it unfortunately has not happened. We wish Bobby and his family the very best in their future endeavors.” 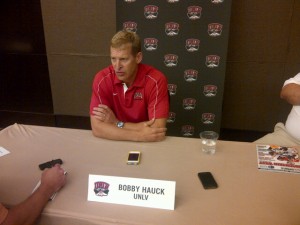 Hauck, who signed a contract extension through the 2016 season that paid him over $700,000 per year after leading UNLV to a 7-6 record and Heart of Texas Bowl berth last season, will receive a $400,000 contract settlement from the school. He has compiled just a 15-48 record (.290) in five seasons at UNLV and has finished with double-digit losses in four of the five years.

Sources close to the program told MyLVsports.com that Bishop Gorman head coach Tony Sanchez, who has led the Gaels (13-0) to a mythical No. 1 national ranking this year, is the frontrunner to replace Hauck. Former South Florida head coach Jim Leavitt and former interim USC head coach Ed Orgeron are other potential candidates but it is believed the job will be Sanchez’s if the wants it.

Attempts to reach Sanchez, who coaches the Gaels against Liberty (10-2) on Saturday afternoon at 1 p.m. in the state Division I Southern Regional final at Rancho High School, were unsuccessful.