Las Vegas is finally big league when it comes to professional sports.

The National Hockey League Board of Governors voted Wednesday to grant Las Vegas an expansion franchise that will begin play in the 2017-18 season at T-Mobile Arena, becoming the city’s first team in one of the four major pro sports.

The Foley/Maloof Sports & Entertainment, LLC ownership group agreed to pay a $500 million entrance fee for the yet unnamed team that will debut in the 100th season of the NHL.
.
“Well Las Vegas, we did it,” Bill Foley, the principal owner of the new team, said. “It wasn’t easy, was it? … Our great sports town now has a major league franchise, the NHL. It’s the best of the leagues. It’s a legendary league.” 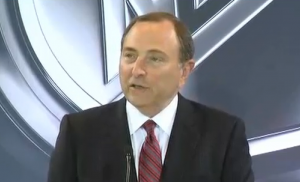 “We think this is a tremendously exciting opportunity, not just for Las Vegas but for the league as well,” NHL commissioner Gary Bettman said during a press conference at the Encore hotel. “We’re excited that Las Vegas will be in our exciting future.”

Bettman said the Las Vegas expansion vote was unanimous. Each NHL team will reap $16.6 million from the expansion fee.

Here’s the official release from the NHL announcing the expansion that also includes information on the expansion draft, league alignment and scheduling.

LAS VEGAS (June 22, 2016) – The National Hockey League announced today that it has granted an expansion franchise to Las Vegas. The franchise, which will begin play in 2017-18, was approved in a unanimous vote by the League’s Board of Governors during a meeting today in Las Vegas.

Ownership of the Las Vegas franchise will principally reside with Bill Foley. The franchise will play its home games in the recently opened, state-of-the-art T-Mobile Arena, which has a hockey capacity of 17,368.

The Las Vegas franchise will pay a $500-million expansion fee. That fee then will be distributed in equal shares to each of the NHL’s 30 presently existing clubs.

“In the fall of 2017, when we celebrate the 100th birthday of the NHL, we will do so as a League of 31 teams,” NHL Commissioner Gary Bettman said. “We are pleased to welcome Bill Foley and the city of Las Vegas to the League and are truly excited that an NHL franchise will be the first major professional sports team in this vibrant, growing, global destination city.”

“On behalf of the Las Vegas Founding 75, our 14,000 season-ticket holders and the entire Las Vegas community, I would like to thank Commissioner Bettman, the NHL staff and the team owners for their support during this process and the confidence they have placed in Las Vegas by awarding this franchise,” said Foley. “I also would like to thank everyone who supported us through this incredible journey. As I’ve said many times over the past year, Las Vegas is a hockey town and we look forward to cheering on our home team.”

The NHL also announced that is has deferred the expansion application by Quebecor and its ownership group in Quebec City. Although the League sees Quebec City as a prime opportunity for future expansion, the Board of Governors concluded that the NHL’s lack of geographic balance, the belief that it would be best not to assimilate multiple teams into the League at this time, as well as the recent and significant devaluation of the Canadian dollar made it prudent to defer Quebecor’s application.

Alignment
The Las Vegas franchise will begin play in the Pacific Division of the Western Conference in 2017-18. There will be no other changes to the NHL’s alignment.

2017-18 Schedule Matrix
Each club will continue to play an 82-game schedule, with 41 home games and 41 road games.
The schedule matrix, which ensures that all teams play in all arenas at least once each season, will be adjusted to the following in 2017-18:

The NHL’s current playoff format will not change.

The following rules were approved for the 2017 Expansion Draft:

* All players who have currently effective and continuing “No Movement” clauses at the time of the Expansion Draft (and who to decline to waive such clauses) must be protected (and will be counted toward their club’s applicable protection limits).

* All first- and second-year professionals, as well as all unsigned draft choices, will be exempt from selection (and will not be counted toward their club’s applicable protection limits).

Player Exposure Requirements
* All Clubs must meet the following minimum requirements regarding players exposed for selection in the Expansion Draft:

* Players with potential career-ending injuries who have missed more than the previous 60 consecutive games (or who otherwise have been confirmed to have a career- threatening injury) may not be used to satisfy a club’s player exposure requirements, unless approval is received from the NHL. Such players also may be deemed exempt from selection by the League.

* The Las Vegas franchise must select one player from each presently existing club for a total of 30 players (not including additional players who may be acquired as the result of violations of the Expansion Draft rules).

* The Las Vegas franchise must select the following number of players at each position: 14 forwards, nine defensemen and three goaltenders.

* The Las Vegas franchise must select a minimum of 20 players who are under contract for the 2017-18 season.

* The Las Vegas franchise must select players with an aggregate Expansion Draft value that is between 60-100% of the prior season’s upper limit for the salary cap.

* The Las Vegas franchise may not buy out any of the players selected in the Expansion Draft earlier than the summer following its first season.

The Las Vegas franchise then will select third in each subsequent round of the 2017 NHL Draft (subject to trades and other potential player transactions).