Prior to Centennial’s road game at Canyon Springs on Thursday night, Centennial head coach Todd Allen said his kids needed this type of game, meaning a tough test against another top-five team in the valley.

The Bulldogs have faced tough tests all season, with games against Coronado, Mojave, Clark and a Wastach Academy (Utah) team that will face Findlay Prep this season.

“It finds out what we’re made of,” Allen said. “We’ve got competitors on our team, and we want to challenge them because our final goal is a state championship.”

After the Bulldogs 70-55 victory, Allen added that his team needed a win in a game like Thursday’s to help stabilize the team’s early start to the season.

The game started with a frantic, back-and-forth pace, with both teams looking to push the basketball. The Pioneers led by one after the first quarter, but the Bulldogs used a 16-6 second to take a 31-22 lead at the break.

In the third, Canyon Springs would cut the lead down to four, but Centennial pulled away after that to hang on to the win that improves the team to 6-2. 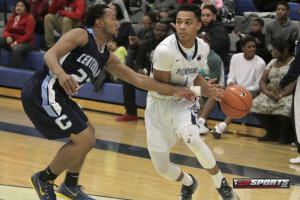 Centennial will have a quick turnaround, hosting Durango on Friday night, while Canyon Springs (5-1) travels to Foothill for a Monday night showdown.