After playing one of the nation’s toughest nonconference schedules that included a toe-to-toe battle with the country’s No. 1 rated team, Miami (Fla.) Washington, many expected Bishop Gorman to breeze through weaker Southwest League competition.

But someone forgot to tell Legacy High that.

Junior Russell Booze rushed for a game-high 118 yards on 22 carries, including touchdown runs of 2, 19 and 5 yards, and quarterback Randall Cunningham II had 176 yards in total offense, including key rushes of 28 and 38 yards to set up two touchdowns, as Gorman rushed for 273 yards in the win.

Senior RB/DB Casey Hughes starred on both sides for Legacy, rushing 111 yards on 16 carries, including a 59-yard touchdown up the right sideline with 1:50 to go in the third quarter that brought the Longhorns to within 17-12. DeMichael Walker was then stopped a yard short on a two-point conversion run that would have narrowed the margin to a field goal. 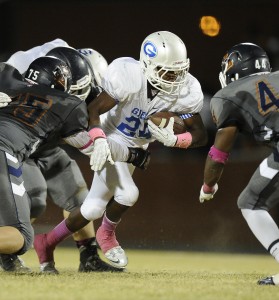 But Bishop Gorman’s offensive line, led by senior tackle Nick Gates and senior center Zack Singer, took control after that. The Gaels drove 80 yards in nine plays – all runs – on the ensuing possession highlighted by a 28-yard scamper by Cunningham who just managed to break away from linebacker Damian Robinson-Stallings in the backfield. Booze capped the march on the next play with a 5-yard run up the middle to make it 24-12 with 10:18 remaining.

Gorman then put the game away a few minutes later with another 74-yard drive that once again was all on the ground and featured a 38-yard run by Cunningham. Sophomore Jonathan Shumaker scored on a 20-yard run and the Gaels led, 31-12, with 5:39 to go.

Legacy, which stayed close in the first half thanks to field goals of 48 and 46 yards by Julian Castro, closed out the scoring with a 5-yard touchdown run by quarterback Devin Williams with just 39 seconds left.

“In the second half, after we got a little pep talk in the locker room (from Sanchez), we just came out and executed,” Booze said. “Nobody wasn’t frustrated or anything. We just stayed calm and focused and kept pounding it on he ground.”

Bishop Gorman hosts Cimarron next Friday while Legacy will try and bounce back against Bonanza.