Expect to hear that chant a lot around the Bishop Gorman campus the next year or so after Gaels five-star quarterback Tate Martell verbally committed to Ohio State during an unofficial campus visit on Sunday.

Martell, who has quarterbacked the Gaels to a 30-0 record and back-to-back mythical national championships over the last two seasons, revealed the news on Twitter.

I'm excited to announce that I
have officially committed to
THE OHIO STATE UNIVERSITY! pic.twitter.com/fWpD7hcZ13

Martell, who originally verbally committed to Washington and then head coach Steve Sarkisian as an eighth-grader in Poway, Calif., de-committed from the Huskies in 2015 and then gave another non-binding verbal commitment to Texas A&M a few months later. He re-opened his recruiting on May 5th as rumors that head coach Kevin Sumlin is on the hot seat entering the 2016 season began to intensify.

The 5-foot-11, 190-pound Martell has completed 257-of-437 passes for 5,145 yards, 72 touchdowns and just eight interceptions in two years at Gorman. He’s also frustrated opposing defenses with his dazzling scrambling ability while also rushing for 1,037 yards and 14 more touchdowns on 171 carries. He is the consensus pick among scouting services (Tom Lemming Prep Report, rivals, Scout, 247sports) as the nation’s No. 1 dual-threat quarterback prospect. 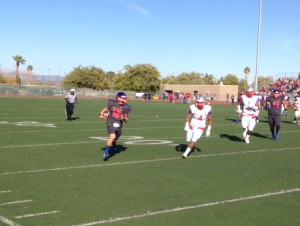 Martell recently had narrowed his recruiting choices to Urban Meyer‘s Buckeyes, USC, Cal, UCLA and Colorado. He joins defensive lineman Haskell Garrett as Bishop Gorman players who have pledged to sign with the Buckeyes in 2017.

Barring another change of heart, Martell’s commitment means UNLV coach Tony Sanchez can count on seeing at least two of his former Gaels on the opposing sideline when the Rebels visit “The Shoe” on Sept. 23, 2017 for a non-conference game.