One win away from a sixth consecutive NIAA state basketball title, it’s fair to say at Bishop Gorman that they don’t rebuild, they just reload.

On a night that senior guards Chuck O’Bannon and Christian Popoola Jr. combined for just 15 points, it was freshman guard Noah Taitz who stole the show, scoring 16 of his team-high 19 points in the first half of a 89-60 blowout of Reno in the 4A semifinals at Cox Pavilion.

The USC-bound O’Bannon, who finished with six points, three rebounds and three assists, and Popoola, a one-time BYU commit who had nine points and 10 assists, both will be well-rested after playing just half the game. Gorman coach Grant Rice was able to clear his bench early and often after the Gaels jumped out to a 26-8 first quarter lead and led by as many as 33 points, 62-29, midway through the third quarter.

“That was the goal today, to just get back to the title game (Friday night),” Rice said. “That was our main focus. Once we got the lead on Reno late in the first quarter, we wanted to put them away but we also wanted to settle down a little bit and make sure we were healthy going into tomorrow night.”

The Gaels led just 13-8 with 3:28 left in the first quarter when Taitz started a 22-5 run with one of his three 3-pointers. He scored 14 points during the streak.

“Obviously it helps when Noah Taitz comes off the bench and is on fire,” Rice said. “That opens it up for everybody.

“Points per minute this year Noah has probably led our team. He’s a big-time freshman player. He has a great future. He’s kind of had glimpses of that all year, and it all came out in the first half tonight.”

Taitz came to Gorman following a big AAU summer with Vegas Elite 2020 which finished ranked No. 4 in the nation after winning the Adidas and Fab 48 Tournaments. Vegas Elite 2020 defeated Indiana Elite in the finals of both tournaments and it was Taitz’s buzzer-beater that won the Fab 48 finale.

“We know he’s a great weapon off the bench for us,” Rice said.

The Gaels now face a Clark squad that is going for its fourth straight state title after moving up from 3A (formerly 1-A) and has its own share of talented underclassmen as well as the confidence of already having defeated Gorman, 68-62, back on Jan. 31. 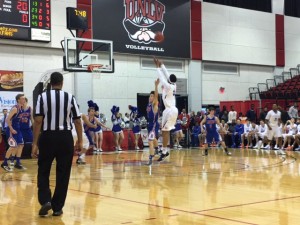 This will be the fourth meeting between the schools this season with Bishop Gorman winning, 70-63, at Clark on Jan. 3 and also 64-51 in last week’s Sunset Region final.

After sophomore guard Jalen Hill sank one of two free throws, Coronado (18-10) had a chance to cut it to two on the ensuing possession but forward Kennedy Koehler missed a pair of shots around the basket and forward William Weems missed another. Then, after James Bridges missed the front end of a one-and-one, senior guard Freddy Reeves missed a long 3-pointer that would have cut the Charger lead to one.

Clark finally put the game away when sophomore forward Ian Alexander and Hill both sank two free throws in the final 17.7 seconds. 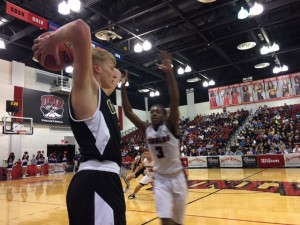