UNLV coach Tony Sanchez was glued to his computer screen watching the NFL Draft unfold on Thursday night as he waited to see where Ronnie Stanley, a cornerstone player on the first three of six consecutive state title teams that Sanchez coached at Bishop Gorman High School, would go.

He didn’t have to wait long.

The 6-foot-6, 312-pound left tackle from Notre Dame, made history when the Baltimore Ravens selected him with the No. 6 pick.

Stanley, who also starred in basketball and volleyball for the Gaels, became the highest player ever drafted out of Las Vegas. He is just the fourth first rounder picked from a Las Vegas high school, joining running back Gerald Riggs of Bonanza (No. 9, 1982, Atlanta), wide receiver Mike Pritchard of Rancho (No. 13, 1991, Atlanta) and running back Steven Jackson of Eldorado (No. 24, 2004, Rams).

“To be a top 10 pick in the NFL Draft is unbelievable,” Sanchez said. “To be the first left tackle taken makes it even more special.”

Sanchez said it didn’t take long for the folks at Bishop Gorman to realize they could be coaching a future NFL lineman.

“We knew right away that Ronnie was a special player,” Sanchez said. “Did we know he would be a future top 10 NFL pick at the time? We’re not surprised at all that he is. We all knew he was very, very special and just an unbelievable athlete for his size.” 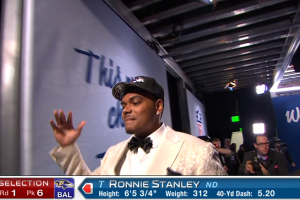 Sanchez said it initially took a little convincing with Stanley and his father Ron to have him play offensive tackle for the Gaels.

“When he first got (at Gorman) they thought he should be a tight end or a defensive end,” Sanchez said. “But we knew all along that he would be a left tackle. They weren’t mad about it but at the time we had to talk about it.”

Turns out it was the right move for everyone involved. 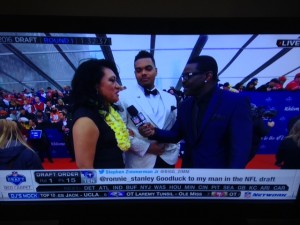 As expected, quarterbacks were chosen with the first two picks of the draft. Cal’s Jared Goff was the top pick by the Los Angeles Rams followed by North Dakota State’s Carson Wentz who was chosen by the Philadelphia Eagles.

The San Diego Chargers pulled the first shocker of the draft when they selected Ohio State defensive end Joey Bosa third. The Dallas Cowboys then made it back-to-back Buckeyes with the selection of running back Ezekiel Elliott at No. 4.

The Jacksonville Jaguars then picked Florida State cornerback Jalen Ramsey, ranked by some the top overall prospect in the draft, setting the stage for the Ravens to take Stanley.

So proud of my guy @ronnie_stanley for being selected #6in this years NFL draft! GATA pic.twitter.com/aHR1PUOZQk

The biggest surprise of the early part of the draft was the nosedive of Ole Miss offensive tackle Laremy Tunsil. Regarded as a potential top five pick, Tunsil’s stock plummeted after a video appeared on his twitter account of him wearing a gas mask with a bong attached apparently smoking marijuana. Tunsil was eventually picked 13th by Miami.

Is This Laremy Tunsil Smoking A Bong Through A Gas Mask? https://t.co/c8uKtzD34c via @thebiglead #badtiming