Three basketball players from southern Nevada high schools were among 24 players selected to play in the prestigious McDonald’s All American Game on March 29 at the United Center in Chicago.

Bishop Gorman guard Charles O’Bannon Jr. and Centennial High School swingman Troy Brown Jr. were selected to play for the West Team while Findlay Prep forward P.J. Washington will represent the East in the contest that will be televised by ESPN.

The 6-foot-6 O’Bannon recently verbally committed to USC while the 6-7 Brown is headed to Oregon. Both played AAU ball for the Las Vegas Prospects.

The 6-9 Washington is one of four players headed to Kentucky that were selected for the game.

Check out the complete rosters below: 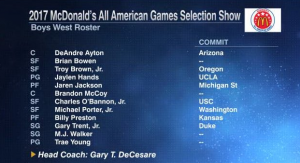 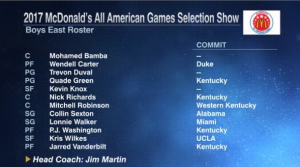 Congrats to our very own @mrobannon5 on being selected to the 2017 McDonalds All-American Game. The 5th Gorman player to receive this honor. pic.twitter.com/CGu6XnqfSH