The host Gaels, however, were the only team to come away with a victory.

Bishop Gorman bounced back from an early scare against Sheldon High School from Sacramento, Calif. The Huskies used a hot-shooting start to take a 28-18 lead in the first half. The Gaels turned up the full-court press to help cut the lead down 34-33 at the half. 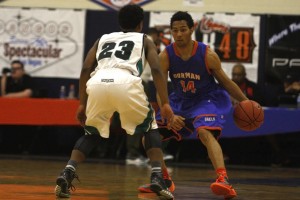 Bishop Gorman senior guard Noah Robotham dribbles against the defense against Sheldon during day 2 of the Tarkanian Classic. 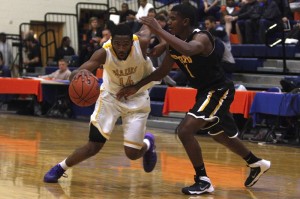 Durango senior guard Darryl Gaynor drives against a defender from Bishop O’Dowd during day 2 of the Tarkanian Classic.

Durango took the floor next, but it wasn’t long before the Trailblazers were trailing big. Top 2015 recruit Ivan Rabb had 28 points as Bishop O’Dowd cruised to a 78-34 victory. Darryl Gaynor led the Trailblazers with 22 points. 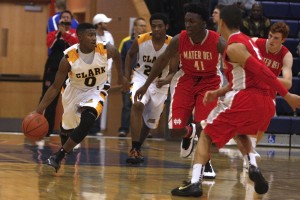 The Clark Chargers came out charging in their matchup with defending tourney champion Mater Dei. After a back-and-forth first half, the Monarchs led 31-28 at the break.

The two teams traded punches to start the second half, but a 13-0 run by Mater Dei helped decided the game. Clark cut the lead down 58-51, but the defending California state Division I champion Monarchs eventually pulled away for a 72-58 win.

The night ended with an upset in the Prep Division when Our Savior New American (Centereach, N.Y.) upended Prime Prep of Arlington, Texas, 69-58. Kobie Eubanks had a game-high 19 points and Damon Wilson added 15 for the New York squad.

Guard Emmanuel Mudiay, considered by some the top guard prospect for the Class of 2014, led Prime Prep with 15 points. Prime Prep plays Findlay Prep tonight at 5 p.m. at the Orleans Arena.

STORY AND VIDEO BY BARRY WONG