Boxer Floyd “Money” Mayweather, in the headlines recently for a potential mega-fight with UFC superstar Conor McGregor, headlines a diverse five-member class for the 2017 Southern Nevada Sports Hall of Fame which was announced Tuesday at Findlay Toyota in Henderson.

Butch Harmon, one-time golf coach of Tiger Woods and president of the Butch Harmon School of Golf in Henderson, former IndyCar racer Sam Schmidt, former Las Vegas High prep star Overton Curtis and the Las Vegas Bowl also will be inducted during a special dinner/ceremony on June 2 at the Orleans Arena. The new group brings the Hall of Fame total to 98 members.

Mayweather, considered arguably the best fighter of his generation who currently owns a perfect 49-0 record, didn’t attend Tuesday’s press conference but is scheduled to be on hand for the induction dinner. Harmon, who currently works with golfers like Dustin Johnson, Rickie Fowler and Natalie Gulbis, also was out of town on business.

Schmidt raced in three Indianapolis 500’s and netted his first victory from the pole at the Las Vegas Motor Speedway in 1999. He became a quadriplegic after a crash while testing at Walt Disney World Speedway in 2000. Undeterred, he founded Sam Schmidt Motorsports and continues to managed a full-time IndyCar team. He also help found the Sam Schmidt Paralysis Foundation, later re-branded Conquer Paralysis Now in 2015, to help find cures and treatments for paralysis.

The late Curtis was a standout performer in football, basketball, baseball and track at Las Vegas High who went on to star at Utah State and signed a professional contract with the Pittsburgh Steelers. He later became a respected prep coach at both Valley and Rancho.

The Las Vegas Bowl, which first kicked off in 1992, has become an annual showcase for the city and continues to grow into one of the premier bowl games in college football.

“We have an outstanding group of athletes who have contributed both in the competitive arena and in the community, as well as one of the most iconic and longest-lasting sporting events in our city,” Hall of Fame executive director Dan Dolby said. “This class again represents the best attributes of our community.”

Ticket information and additional details about the induction ceremony can be found at www.SNSHF.com or on Facebook (Southern Nevada Sports Hall of Fame) or Twitter (@SNSHF). Proceeds from the event will be donated to organizations committed to the support and enhancement of Southern Nevada youth through active participation in programs designed to promote leadership, values and character through sports. 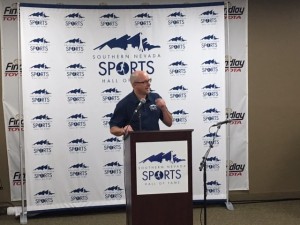