UNLV’s 1998 NCAA national championship golf team and former American League Rookie of the Year Marty Cordova highlight the Class of 2016 for the Southern Nevada Sports Hall of Fame that was announced during a ceremony on Thursday.

Two-time UFC heavyweight champion Frank Mir, a product of Bonanza High School considered to be one of the best big men in the sport of mixed martial arts, and Sig Rogich, a life-long Nevadan who has dedicated his life to public service, athletics and promoting business in the state and also was instrumental in helping lure a coach named Jerry Tarkanian to UNLV, also are part of the class that will be enshrined on June 24 at the Orleans Arena.

This is the 20th anniversary for the Southern Nevada Sports Hall of Fame. Proceeds from the event will be donated to organizations committed to the support and enhancement of Southern Nevada youth through participation in programs designed to promote leadership, values and character through sports.

UNLV head coach Dwaine Knight and Jeremy Anderson, a member of the 1997-98 squad, were on hand for the official announcement at the Hall of Fame, which is located on the second floor at Findlay Toyota in Henderson. That team won the national championship by three shots over Clemson and included Chris Berry, who tied for second individually, Bill Lunde (tied for 15th), Charley Hoffman (tied for 20th), Anderson (tied for 29th) and Scott Lander (tied for 37th). Other members of the team included Daron Dorsey, Scott Wingfield and Christian Thornley.

Cordova starred at Bishop Gorman High School and broke into the big leagues in 1995 with the Minnesota Twins, hitting .277 with 24 home runs and 85 RBIs en route to American League Rookie of the Year honors. He batted .274 with 122 home runs and 540 RBI in his nine-year career that also included stints with Toronto, Cleveland and Baltimore.

For further information and details on the induction ceremony as well as a golf tournament to be held a day earlier, go to www.SNSHF.com. Updates also will be available on Facebook (Southern Nevada Sports Hall of Fame) and Twitter (@SNSHF). 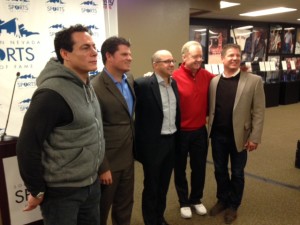