The Fremont Cannon is a blue again following Nevada’s stunningly one-sided 45-10 victory over UNLV on Saturday afternoon before a crowd of 23,569 at Sam Boyd Stadium.

The Rebels, meanwhile, are simply black and blue.

“They just took us out to the woodshed today,” UNLV coach Tony Sanchez admitted.

The Wolf Pack (5-7, 3-5 Mountain West), a 10-point underdog perhaps playing to save head coach Brian Polian’s job, jumped out to a 17-0 lead before the game was barely over a quarter old, led 27-10 at halftime and then outscored what looked like a tired and listless UNLV (4-8, 3-5) squad 18-0 in the second half to put an exclamation point on the lopsided victory.

How lopsided was it? Consider:

* The Wolf Pack, which entered the game with the nation’s worst rushing defense, finished with a 318-182 rushing edge and a 511-303 advantage in total yards.

“I don’t think there’s any explanation,” linebacker Ryan McAleenan said. “We just came out flat and weren’t ready to go in the beginning of the game.”

“It looked like we were a tired and worn down football team, and that’s unacceptable to be that in a game as big as it was,” Sanchez said. “I thought they came out and played with a lot more energy than us. … That’s very uncharacteristic for us.”

Junior running back James Butler led the way for Nevada, rushing for 196 yards on 32 carries including touchdown runs of 33, 3 and 13 yards. He also caught a 14-yard touchdown pass from sophomore quarterback Ty Gangi that made it 27-7 with 2:05 left in the first half.

Gangi started the ball rolling for the Wolf Pack with a 19-yard touchdown run to cap a 65-yard, eight-play game opening drive. He finished with 99 yards rushing on nine carries and also completed 15-of-22 passes for 193 yards and touchdown. 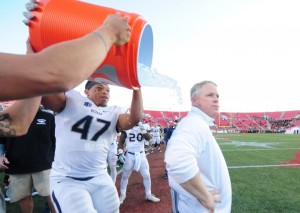 “It set a tone for the day,” Gangi said of the first series. “We talked about going in and starting fast. We were able to do that. Once we got up on them we were able to keep it going and keep it rolling all night.”

One of the few highlights for UNLV was a brilliant 27-yard touchdown run by quarterback Kurt Palandech in the second quarter. Palandech, who rushed for a team-high 98 yards on 14 carries but completed just 9-of-22 passes for 121 yards, no touchdowns and an interception, swept to his right and then zig-zaged his way to the middle of the field and the end zone, breaking six tackles along the way. The play came in at No. 2 on ESPN SportsCenter’s Top 10 Plays of the Day (See VIDEO above).

“We didn’t play our best game by any means,” Palandech said. “Personally, I felt like our guys were ready to go out there and compete, but obviously we weren’t.”

UNLV, which improved its win total by one for the second straight season under Sanchez, lost its season finale the seventh straight year dating back to a 2009 win over San Diego State. 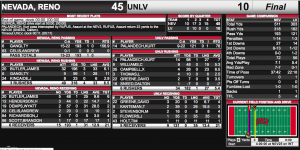