UNLV’s annual Spring Showcase on Saturday definitely had a rock-n-roll feel to it with speakers blasting songs like “Welcome To The Jungle” and “The Boys Are Back In Town” while the Rebels scrimmaged on Peter Johann Memorial Field.

But one song that would have been more appropriate was missing: Creedence Clearwater Revival’s classic “Who’ll Stop The Rain.”

A downpour accompanied by hail and lightning halted the scrimmage after 33 plays as officials cleared the field for safety reasons.

UNLV coach Tony Sanchez said he had planned to run only about 60 plays anyway and wasn’t too disappointed that his team’s 2016 spring practice came to an early soggy end.

“I tell them all the time there’s a storm coming and it’s called Rebels,” Sanchez joked with reporters afterward. “The storm sure came today. … As long as it all ends up in Lake Mead we are all good, right?”

Just prior to the stoppage junior quarterback Kurt Palandech connected with tight end Trevor Kanteman, a junior college transfer from Los Angeles Pierce College, for the only touchdown of the day (See VIDEO above). 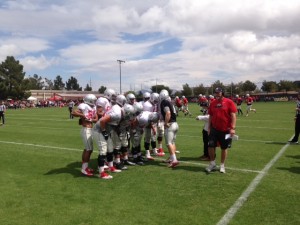 Sanchez said he had planned to flip things in the second half of the scrimmage and give Palandech two series with the No. 1 offense and Stanton one. He said there is no timetable on naming a starting quarterback for the start of fall camp in August or the team’s Sept. 1 opener with Jackson State.

“Even if we are 95-percent sure, why rush?” Sanchez said.

Explosive sophomore Lexington Thomas, praised by Sanchez for a strong spring and heading into the fall as the team’s starter at tailback, led all rushers with 20 yards on five carries. Sophomore Brandon Presley, who along with redshirt freshman Darren Woods Jr. both had strong springs, was the top receiver with two catches for 59 yards.

Defensively, senior defensive back Torry McTyer had two tackles and a pass breakup while senior linebacker Iggy Porchia had the day’s only quarterback sack.

“I think overall you saw a lot of good things in a short amount of time,” Sanchez said. “What a great crowd, though. It’s going to be a good year coming up.” 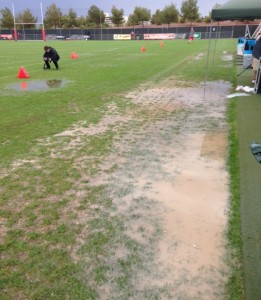