In a season marked by a shocking home loss to FCS Howard and a brutal second-half collapse at Air Force, the Rebels (3-5, 2-3) pulled off one of the biggest upsets in school-history on Saturday night, stunning Fresno State, 26-16, at Bulldog Stadium.

Johnny Stanton, moved back from linebacker to fill in for injured starting quarterback Armani Rogers (concussion), completed 17-of-29 passes for 155 yards and also rushed for a touchdown while Lexington Thomas scored what proved to be the game-winning touchdown on a two-yard run early in the fourth quarter as the Rebels won in Bulldog Stadium for the first time since the 1984 California Bowl when Randall Cunningham was playing QB.

Fresno State (5-3, 4-1), coming off an impressive 27-3 Oil Can Trophy upset of San Diego State, closed as a 22½-point favorite according to Covers.com.

Walk-on placekicker Daniel Gutierrez was 4-of-4 on field goals, including a game-clinching 25-yarder with five minutes remaining after the Bulldogs suffered a 36-yard loss on a snap over punter Blake Cusick’s head that gave the Rebels the ball at the Bulldog 19-yard line.

“It feels great,” Stanton, who also finished with 38 yards rushing, said. “It’s been kind of a roller coaster this year. Moved positions a little bit. Linebacker was quite a ride. Two weeks of that was real tough. I’ll never forget that experience. But I feel right at home at quarterback. That’s where I love to play. That’s where I came here to play. But wherever coach wants me I’m going to play. I think of myself as a football player, and as long as we’re winning I’m happy.”

Fresno State was plagued by a muffed punt, a fumble and several dropped passes besides the very key bad punt snap.

“The ball bounced our way a couple of times, sometimes it happens and tonight it did and we took advantage,” UNLV coach Tony Sanchez said. 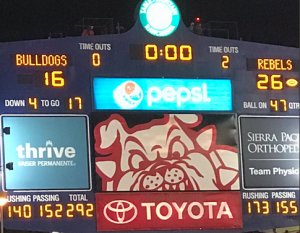 “I think we just got outplayed,” quarterback Marcus McMaryion told the Fresno Bee. “Credit to UNLV. They came in. They played and did their job. They made plays when they needed to make plays and we didn’t, myself included.

“When you’re playing good teams stuff like that and close games, you can’t shoot yourself in the foot. I mean, I think a lot of plays out there we kind of beat ourselves. Obviously, UNLV played good, but we did leave a lot of stuff out there.”

UNLV must win three of its final four games, all against teams with losing records, to become bowl eligible. The Rebels host Hawaii (3-5, 1-4) on Saturday at 3 p.m. followed by a Friday night nonconference home contest with struggling BYU (2-7). The final two games are on the road at New Mexico (3-5, 1-4) and Nevada (1-7, 1-3).

Check out VIDEO highlights from the game below.

HIGHLIGHTS: Rebels come away with big 26-16 win over the Bulldogs in Fresno tonight! #UsNowLV pic.twitter.com/y4NecoKs0I