COLUMBUS, Ohio – After opening the season with a stunning upset loss to FCS Howard and rebounding with an impressive road win over a future FCS school in Idaho, UNLV finally got to play a game with the big boys Saturday.

Tenth-ranked Ohio State (3-1) jumped out to a 37-0 lead in the first 21 minutes and the Buckeyes set a school record with 474 passing yards and a Big Ten record with seven different receivers scoring touchdowns en route to a 54-21 victory before a crowd of 106,187 at Ohio Stadium.

Call it a win-win for the two schools. Tony Sanchez’s Rebels (1-2) took home a much-needed payday of $1.3 million for the beat-down while Urban Meyer’s rebuilding Buckeyes got a nice tune-up before returning to Big Ten play next week at Rutgers.

Meyer substituted freely in the second half. Senior quarterback J.T. Barrett, under the microscope for his sub-par play in a 31-16 loss to Oklahoma on Sept. 9, completed 12-of-17 passes for 209 yards and five touchdowns before giving way to freshman Dwayne Haskins, who finished 15-of-23 for 228 yards and two touchdowns. Sophomore Joe Burrow, sidelined for over a month with a broken bone in his hand, came on in the fourth quarter and was a perfect 4-of-4 for 37 yards.

Ohio State finished with 664 total yards, including 95 yards rushing on 14 carries by freshman running back J.K. Dobbins, who didn’t play in the second half after the Buckeyes built a 44-7 halftime lead.

“Probably the same thoughts as everybody else,” Meyer replied when asked what he thought about his team’s offensive showing. “Let’s do it against a team that’s equally matched.”

There were some positives for the Rebels.

* Junior running back Lexington Thomas rushed for 84 yards on 12 carries and scored two touchdowns, including a 55-yarder in the third quarter.

* Sophomore DB/LB Javin White scored the game’s final touchdown on a 65-yard interception return off Haskins and also forced a fumble at the UNLV one-yard line to stop another Ohio State drive.

* Freshman quarterback Armani Rogers, swarmed by a strong Ohio State pass rush that produced four sacks, finished a respectable 11-of-19 for 88 yards but was also intercepted twice. He also had a highlight-reel scramble down the right sideline where he tried to leapfrog a pair of Buckeye defenders. 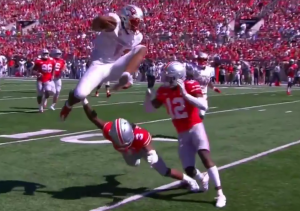 And the Rebels actually won the second half, 14-10.

“Proud of my guys,” Sanchez said. “I tell you what, they never stopped fighting. They hung in there and kept playing hard against a high-caliber football team.”

The question is how costly was the loss. Starting wide receiver Kendal Keys, who had three catches early in the game, and starting center Zack Singer were among those who departed early with injuries.

“Saw a lot of growth today and it’s time to rally the troops and get ready for conference next week,” Sanchez said.

Check out highlights from the game below:

.@Yung_Lexxo bounces and stretches for the Rebel TD! @UNLVFootball trails #9/10 Ohio State, 37-7, with 3:32 left in the first half #mwfb pic.twitter.com/oG9gF0LdjZ

WATCH: Javin White with the Rebels' first defensive score of the season on a pick six! pic.twitter.com/MShnYaEX4q

Is it speed you want in your receivers?

Oh, @PCampbell2 has plenty of it, as he shows on this @OhioStateFB TD. pic.twitter.com/5yBYGGAHcy