With only five scholarship players suited up, UNLV limped to the finish line in Mountain West play on Saturday night, getting blown out by San Diego State, 92-56, at Viejas Arena in San Diego.

UNLV (17-14, 8-10), which lost starting forward Derrick Jones Jr. to a NCAA mandated suspension for an invalid test score on Wednesday, also played without starting point guard Jerome Seagears, who has been battling heel, hand and back injuries, as well as starting forward Dwayne Morgan (shoulder).

The Runnin’ Rebels now turn their attention to trying to win the Mountain West Tournament and garnering the conference’s league’s automatic NCAA Tournament bid. UNLV will be the No. 7 seed and will play No. 10 seeded Air Force on Wednesday at 1:30 p.m. at the Thomas & Mack Center. The winner comes right back on Thursday to play No. 2 seed Fresno State in the quarterfinals at 6 p.m. 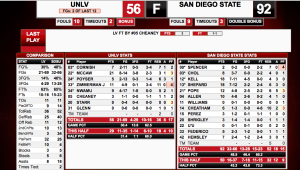