Forward Ben Carter announced on Twitter on Wednesday morning that he will play his senior season at Michigan State.

Carter was often referred to as the “glue guy” for the Runnin’ Rebels. Translation: He actually was fundamentally sound and played hard every game, a rarity last season for most UNLV players. He will be eligible for the 2016-17 season as a graduate transfer.

For those who have been waiting for my announcement. I'll be heading to Michigan state next season to finish my college career.

Carter also considered Arizona, Arizona State, North Carolina State and Miami as well as remaining at UNLV to play for new head coach Marvin Menzies. He said the decision to leave his hometown was not an easy one.

Leaving UNLV and the city of Las Vegas was not an easy decision for me to make, but I believe it is what's best for me and my college career

Michigan State has three open scholarship spots and a need for depth at forward. The Spartans lost forwards Marvin Clark Jr. and Javon Bess to transfer earlier this off-season while freshman Deyonta Davis has declared for the NBA Draft and is considered a potential lottery pick. 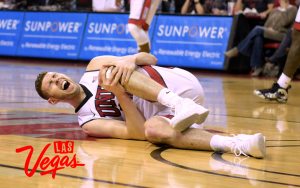