Birch a no-show for opening practice

UNLV held its first official practice of the 2013-14 season on Monday afternoon at the Mendenhall Center under what might best be described as peculiar circumstances.

Stephen Zimmerman, the 6-foot-11 junior blue chipper from Bishop Gorman High School that many Runnin’ Rebel fans are keeping their fingers crossed will be the team’s center of the future, sat courtside with his parents watching the spirited workout.

Meanwhile, Khem Birch, the team’s starting center this season and the reigning Mountain West Defensive Player of the Year, was no where to be found.

“Khem overslept this morning,” UNLV coach Dave Rice said. “He missed weights, and my feeling is for us to get to the level that we have the opportunity to get to, we all have to be on the same page. So I suspended Khem for the day. He and I will meet tomorrow, and I suspect that he’ll be at practice tomorrow.”

Rice said he is counting on the 6-foot-9 junior to be a team leader this year.

“I’m expecting leadership from him,” Rice said. “He let me and more important he let our team down today. He’s a great kid and a team guy but we’ve all got to be on the same page to get to where we need to get to.”

Junior forward Roscoe Smith didn’t have any trouble making the morning weight-lifting session. And there was no way the UConn transfer was going to be late for his first official practice after having to sit out the entire 2012-13 season.

“I was excited,” Smith said. “I was like a kid in a candy store. I was so happy. I just laid in bed (Sunday night) just throwing a basketball in the air. I was so excited.”

After the morning weight training session, the team had a two-hour break before hitting the court for practice. But Smith said he decided to stick around the Mendenhall Center instead of heading home for a nap or a bite to eat.

“I just stayed in the locker room,” Smith said. “I watched cartoons and I was just counting down the hours to practice. I was just so excited.”

Senior guard Kevin Olekaibe, a transfer from Fresno State who prepped at Cimarron High School, took part in practice but still has is awaiting word from the NCAA on his eligibility waiver.

Olekaibe left Fresno State to be closer to his ailing father who has suffered two strokes and is paralyzed from the waist down. He averaged 8.3 points per game last season for the Bulldogs after averaging 17.3 points as a sophomore. 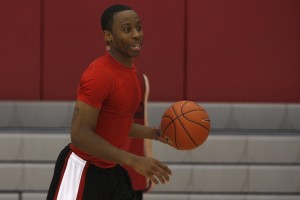 “We submitted a waiver with the NCAA and we’re just waiting for the response,” Rice said. “But he’s able to practice and he’s been able to work out with us and he’s part of our team.”

Rice said the waiver was submitted at the start of the fall semester in August.

Sophomore forward Savon Goodman, suspended for the entire 2013-14 season after being charged with two felonies and a misdemeanor for his part in a May burglary, practiced Monday and will remain with the team until his legal issues are resolved.

Goodman and 6-foot-11 senior center Carlos Lopez-Sosa, who nailed several 3-pointers and was very active defensively, were arguably the two best players during the portion of the workout that was open to the media.