The old saying that you can’t tell the players without a scorecard couldn’t have been more true than when the UNLV Runnin’ Rebels opened their 2016-17 season with a 96-80 exhibition victory over Dakota Wesleyan on Tuesday night at the Thomas & Mack Center.

Only three of the 14 names on the scorecard – forward Tyrell Green, guard Jalen Poyser and forward Dwayne Morgan – were on the team a year ago and Morgan, still recovering from off-season hip surgery, didn’t play.

No. 1 in the program and no doubt in the hearts of a lot Runnin’ Rebel fans after this one was high-flying sophomore guard Kris Clyburn who finished with a double-double of 22 points and 11 rebounds.

Poyser and Green both started and were two of six Rebels to score in double figures in the surprisingly close game with the Tigers, a NAIA Division II team from Mitchell, S.D. All but two its 15 players hailed from that noted basketball hotbed of South Dakota.

The Tigers closed to within eight points, 75-67, on a Jason Spicer layup with 8:39 remaining before UNLV went on a 10-1 run that featured seven points by Poyser to erase any fears of a potential upset in Marvin Menzies’ debut as Runnin’ Rebels head coach.

HOW IT HAPPENED: UNLV took advantage of its superior size – Wesleyan’s tallest starter was just 6-foot-6 – to register a 44-35 rebounding advantage and parlayed that into an 18-2 edge in second chance points. The Rebels also forced 15 turnovers and finished with a 20-8 advantage in points off turnovers.

WHO STOOD OUT: Clyburn, an explosive 6-foot-6 transfer from Ranger (Texas) College, finished with game highs in points (22 on 11-of-14 shooting), rebounds (11), steals (5) and blocks (3) and had several crowd-pleasing dunks.

Poyser, known more for his 3-point shooting prowess, got the start at point guard and finished with 15 points, including 2-of-5 3-pointers, six rebounds, five assists and two turnovers in 29 minutes of action. Green and St. John’s transfer Christian Jones each added 14 points.

THE SKINNY: Trying to blend in all the new faces resulted in numerous defensive breakdowns for the Rebels who struggled to stop dribble-penetration. UNLV finished with only a 48-42 edge in points in the paint as the Tigers repeatedly drove to the basket for layups.

QUOTES TO NOTE: “Kind of mixed feelings. Always feels good to have a win obviously, even in an exhibition game. That’s why you play the games. … I thought we were a little further along defensively so I’m a little shocked by the amount of game slippage.” – UNLV coach Marvin Menzies.

“I just let the game flow to me. I didn’t force shots, took shots when they were open, got to the basket, rebounded … everything else came in play.” – UNLV guard Kris Clyburn on his sparkling 22 point, 11 rebound debut.

UP NEXT: UNLV hosts New Mexico Highlands in its final exhibition on Friday night at 7 p.m. at the Thomas & Mack Center. 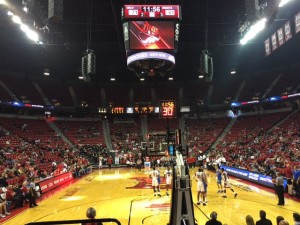