UNLV head coach Marvin Menzies made it clear that he wasn’t happy with his team’s defense … or lack of it … in Tuesday night’s 96-80 exhibition win over Dakota Wesleyan.

That message apparently got through loud and clear to the Runnin’ Rebels who responded by forcing 27 turnovers to go with 13 steals and nine blocked shots in a 92-66 exhibition win over New Mexico Highlands on Friday night at the Thomas & Mack Center.

UNLV finished with an 35-10 edge in points off turnovers and held the the Cowboys, a NCAA Division II team, to just 35.1 shooting.

Sophomore guard Jalen Poyser led the Rebels with 21 points, five rebounds and five assists while guard Kris Clyburn added 15 points, four rebounds and a game-high four steals. The Rebels never trailed and led by as many as 34 points midway through the second half.

UNLV opens its season on Friday against South Alabama at 7 p.m. at the Thomas & Mack Center.

“We are pumped,” Menzies said. “I think the guys understand that it gets real now.” 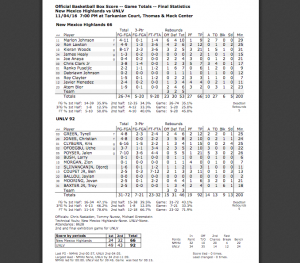 Check out VIDEO highlights below: