It is a statue fitting for a new member of the Naismith Memorial Basketball Hall of Fame.

Fitting for someone who pretty much put UNLV athletics on the national map.

UNLV officially unveiled a statue dedicated to Jerry Tarkanian on Wednesday afternoon, the man who put the “Runnin’” into Runnin’ Rebels.

The statue, located on the south side concourse of the Thomas & Mack Center near the main entrance to the Cox Pavilion, was created by noted sculptor Brian Hanlon and features Tark the Shark seated on a chair with his trademark towel in his mouth and an empty chair to his right. Longtime UNLV basketball fans will remember the superstitious Tarkanian always left that chair empty on the bench.

Behind the statue is a wall that features photos of the 1990 national title team and trophy and a standing Tarkanian munching on a towel. It is a must-see for any UNLV basketball fan. 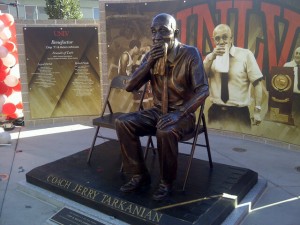 The 83-year-old Tarkanian, who has battled several health issues in recent years, sat in the front row with his wife Lois and the rest of his family during a ceremony that featured the unveiling. About 300 invited guests also were on hand.

“This beautiful statue is a lasting tribute to not only me but all my players and coaches,” a seated Tarkanian read from a prepared statement. “I never dreamed something like this could happen. … I love you all and I’m deeply grateful. Thank you very much.”

UNLV coach Dave Rice, a member of the 1990 national title squad, said the statue was just another impressive piece to the legacy of Rebel basketball that Tarkanian helped establish.

“It’s another thing that just talks to the fact that we have one of the elite programs in the history of college basketball,” Rice said. “It pays homage to the legacy of Coach Tark and what has been done here before. It’s an exciting thing. I just think history is important. … It helps to build future tradition when you talk about past tradition.”

UNLV opens its 2013-14 season on Friday night at 8 p.m. with an exhibition game against Dixie State at the Thomas & Mack Center. 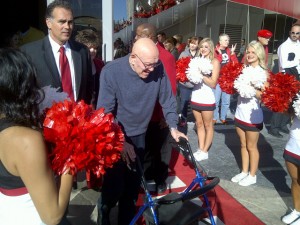 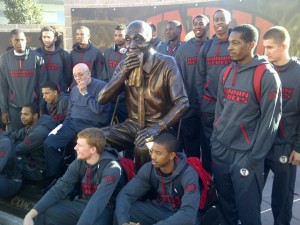 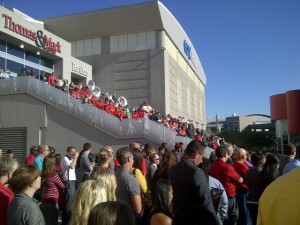