BROOKLYN, N.Y. – Just 24 hours after suffering the worst loss of the Dave Rice era, the UNLV Runnin’ Rebels bounced back to pull out arguably one of the biggest wins of his four-year tenure.

Okay, maybe a 57-50 win over a Temple team that finished tied for eighth in the American Athletic Conference a year ago and is picked to finish sixth in this year’s preseason poll doesn’t rate up there with an upset of a No. 1-ranked North Carolina or even Mountain West victories over teams like San Diego State and New Mexico. But, mentally anyway, it was positive sign for a freshman-laden team to bounce back from Friday night’s embarrassing 89-60 blowout loss to Stanford and earn at least a split on its long trip east for the Coaches vs. Cancer Classic.

“It was a character win for us,” Rice said.

Another positive? The performance of big man Christian Wood.

The 6-foot-10 sophomore scored 16 of his career-high 18 points in the second half and also finished with a game-high 13 rebounds and four blocks.

Wood, who was just 1-for-4 at halftime when the Rebels were trailing, 27-24, was almost flawless in the second half, sinking his first six shots and going 7-of-9 from the floor. He had three dunks and also sank a 3-pointer that put UNLV ahead for good, 29-27.

“After I got a couple of put-backs and a couple of rebounds, I felt like I had it going,” Wood said. “I stayed down low and they kept running plays for me and I just got it going.”

Guard Cody Doolin was the only other Rebel to score in double figures with 10 points and five assists. Rashad Vaughn, Jelan Kendrick and Patrick McCaw all finished with seven points. 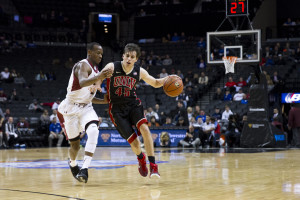 UNLV (3-1) held Temple (2-2) to just 24.1 percent shooting, including 5-of-33 (15.2 percent) in the second half. Still, the Owls had a chance to tie it at 51-51 late but guard Quenton DeCosey missed a 3-pointer, and after a miss in traffic by Will Cummings (game-high 21 points), McCaw took the rebound and went the length of the court for a layup to give the Rebels a five-point lead with 50 seconds left. UNLV sank four free throws down the stretch to seal the win.

UNLV returns to action on Saturday afternoon at 3:30 p.m. when it hosts Albany (1-2) at the Thomas & Mack Center.