Tony Sanchez had less than two months to put together a coaching staff and his first recruiting class days after leading Bishop Gorman to its first mythical national championship 14 months ago.

With a full year to recruit this time around, Sanchez and company sent notice that they will be a force to be reckoned with.

UNLV’s 23-player class announced Wednesday, which includes 15 high school players and seven midyear JC transfers, was ranked in the top five of the conference by two recruiting services and on paper appears to be the school’s best in over a decade.

Whether that translates into a bowl game or a conference title in the fall remains to be seen. But Sanchez believes the Rebels have closed the gap talent-wise to at least be in the conversation.

“In nine of the 12 games we played last year, we won three of them and the other six were seven-point games in the fourth quarter,” Sanchez said. “Not that far away. This class has to help us bridge that gap. … We’re not that far away. We’re excited about it.”

Ten players garnered three stars (on a scale of five) from Rivals, breaking the school record of eight set in 2009 and second only to Boise State’s 12. But before proclaiming this as the best class in school history it should be remembered Internet scouting services weren’t around when Harvey Hyde was beating schools like Notre Dame, USC and UCLA for the late Kirk Jones, widely regarded as the top running back prospect on the west coast his senior year at Long Beach Poly, or USC for a future Hall of Fame quarterback named Randall Cunningham.

Sanchez did land two highly touted quarterbacks in Johnny Stanton (6-2, 235), a mid-year transfer and junior college All-American at Saddleback College (Mission Viejo, Calif.) who was a bounce-back from Nebraska where he played for current Rebel offensive coordinator Barney Cotton but appeared in just two games after redshirting, completing one pass for six yards.

The Rebels also picked up one of the top high school quarterback prospects on the west coast, Armani Rogers of Los Angeles Hamilton High School, who was actually was rated a four-star recruit by ESPN.com. The 6-foot-5, 205-pound Rogers, who has drawn comparisons to former UNLV star Jason Thomas and has been timed at 4.72 in the forty, originally committed to Cal before his senior year after leading the Yankees to the Los Angeles City Division II title.

“He has a special career ahead of him,” Sanchez said. “He’s a big-armed, strong kid who is a dual-threat guy. … His ability, size and arm strength point to a tremendous future.” 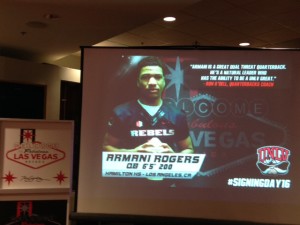