Somewhere high, perhaps right below listing coaching the school to the 1998 NCAA national championship and right above his two National Coach of the Year awards, he can add this impressive line: one Masters champion.

Adam Scott, who once garnered WAC Freshman of the Week honors while playing at UNLV in 1998-99, became the first Rebel to claim a major title on Sunday when won the Masters in dramatic fashion in Augusta, Ga., sinking a 12-foot birdie putt on the second hole of a playoff with 2009 champion Angel Cabrera.

Scott, who also holed a 20-foot birdie on the 18th hole of regulation that helped set the stage for the playoff, also became the first Australian to claim the green jacket.

“What an incredible day,” Scott said. “Everything fell my way at the end I guess. … It’s incredible.” 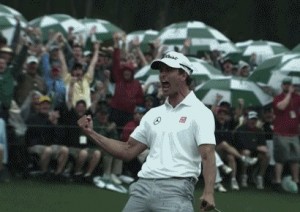 Scott’s victory, which earned him a cool $1,440,000 payday, was the 19th PGA Tour win by a former UNLV golfer. Scott has accounted for nine of those.

“I’m really proud of Adam – just awesome stuff,” Knight, who has produced 41 All-Americans, including Scott, in his 26 seasons at UNLV, said.

“We’ve have had so many guys from our program get so close to a major championship over the years with several second-place finishes and some third-place showings. So we have had some guys really close in the hunt, but to finally have one from our program is a real statement. It is great for our program.”

Scott appeared to have won the tournament in regulation when he sank his 20-footer in rainy conditions. But Cabrera forced the playoff a few minutes later with a birdie of his own following a remarkable 7-iron from 163 yards out that landed three feet from the cup. The duo finished at 9-under 279.

“Part of the promise to get this program to where it has been from the start was to win a collegiate national championship and to produce major winners on the Tour,” Knight said. “Adam has made that part of the dream come true.”