With dark gray skies and rain falling off and on, Monday wasn’t the best day to be painting outside.

That is unless you were the UNLV football team.

After knocking off in-state rival UNR, 23-17, on Saturday night in Reno, the Rebels took possession of the coveted Fremont Cannon for the second time in three years. And that meant painting the prized howitzer with a fresh coat of Rebel red paint.

UNLV coach Tony Sanchez, senior starting quarterback Blake Decker – who had his left arm in a sling after suffering a shoulder injury late in the first half – and senior tight end Jake Phillips took turns addressing the crowd outside the Student Union before Athletic Director Tina Kunzer-Murphy directed Sanchez to “Lets paint that cannon red, Tony.”

“It’s great,” Sanchez said of taking possession of the Fremont Cannon. “You’ve got that cannon and you are rolling it through campus and you see all the excitement right now – the band’s playing, the cheerleaders are out and all you guys (media) are here – that’s an exciting day because I’m sure there’s a lot of Mondays after the Reno game that you guys haven’t shown up on campus.”

Indeed, it was only the second time in 11 years that UNLV defeated the Wolf Pack. 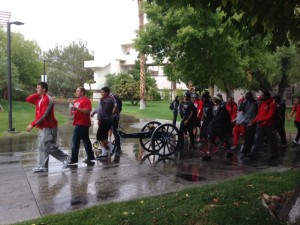 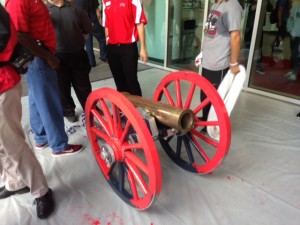